As an international sperm and egg bank, Cryos supplies frozen donor sperm and eggs to more than 100 countries worldwide. It all started in Denmark in 1981, when Cryos’ founder had an unusual dream about frozen sperm. Though many years have passed, the vision remains the same: to help people make their dream of having a child come true.

Cryos International is the world’s largest sperm and egg bank, offering delivery to over 100 countries. With our large variety of carefully selected donors of diverse ethnicities and phenotypes, our mission is to guide you on your path to parenthood and offer personal and professional counsel. Our vision and purpose is to help people make their dream of having a child come true, and we are proud to have achieved the industry’s highest number of registered pregnancies worldwide. Read on to learn more about Cryos.

What we do at Cryos

At our departments in Denmark, Cryos collects sperm donations from men who wish to help others make their dream of having a child come true. The sperm is then processed in the lab to ensure a high-quality product ready for use in fertility treatment. At Cryos we divide the sperm into IUI or ICI sperm straws according to the sperm motility and quality. We have specialized in cryopreservation of sperm, which means the sperm is frozen and safely stored in a nitrogen tank at -196 °C.

As a sperm bank, Cryos does not perform fertility treatments – but we have a large network of top-performing fertility clinics that do. Via our online Sperm Donor Search, clinics and private persons can purchase the donor sperm and have it delivered to a clinic or healthcare professional.

Why use a sperm bank?

The demand for donor sperm is generally high, and due to new family structures, there has been a significant development in this area in recent years. There can be many reasons for getting pregnant with donor sperm, but the main groups of people turning to Cryos are women planning to become Single Mothers by Choice or lesbian parents as well as heterosexual couples experiencing infertility.

How to order donor sperm from Cryos?

You can order donor sperm from Cryos online and have it delivered to your fertility clinic. All our donors are represented in our online Donor Search with a donor profile - at Cryos we offer both ID Release and Non-ID Release donors with Basic or Extended Profiles.

The price of donor sperm depends on which type of donor and sperm quality you choose.

With over 30 years of experience, Cryos is here to assist you on your journey to parenthood with personalized guidance every step of the way. We speak more than 14 languages and provide donor sperm and eggs for fertility treatments both domestically and abroad.

Cryos is authorized as a tissue establishment by the Danish Patient Safety Authority. As quality, compliance, and safety are essential factors at Cryos, we are also certified in accordance with the international standard for quality management ISO 9001:2015. Moreover, we have in-house quality and legal departments as well as state-of-the-art laboratories.

We care deeply about our #CryosFamily – our donors, customers, families, and staff. We always strive to create a welcoming and reassuring environment for everyone visiting our locations, and to provide the highest quality of dedicated support and guidance – every time.

To Cryos, it is personal. 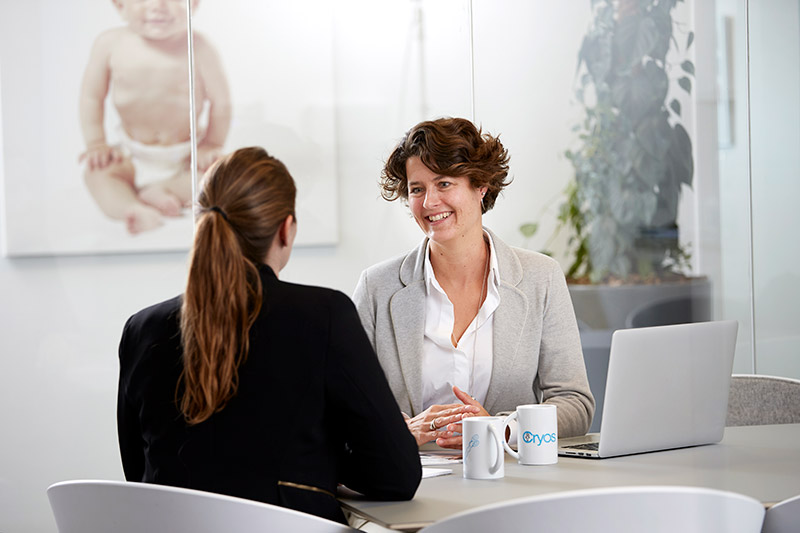 A sperm bank founded on a dream

Cryos started with an usual dream back in 1981. At that point, the founder, Ole Schou, did not imagine that one day it would result in the world’s largest sperm bank. Here he shares the story:

"I don’t know why I had this dream back in 1981. But for some strange reason, the moment I woke up I just knew I had to find out everything there was to know about frozen sperm. It became somewhat of an obsession and I basically read every book and paper ever written about the subject. Little did I know, that I had suddenly become one of the leading experts in the subject without even being a scholar of natural science.

Fortunately, I was able to combine my knowledge about frozen sperm with a Graduate Diploma in Business & Administration, and gradually establish a successful commercial business. Utilising my knowledge about the process of freezing and storing human sperm, I started collaborating with doctors and clinics who were very satisfied with my work and my product. Business took off, and at first my office and laboratory were established as a service merely for frozen sperm storage. In 1990 the donor programme was established, and international demand increased rapidly.

Later on, we started specialising in the egg vitrification technology as well. This means that we are now able to help even more people around the world becoming parents."

Learn more about Ole Schou and the story of Cryos in this mini documentary.

Take a glance at the story of Cryos in the slider below. Here we have gathered some of the highlights from the years that have passed since Cryos was founded and up until today.

Cryos in the U.S. moved from New York to Orlando, FL.

Cryos became a licensed tissue centre according to the EU Directives

Cryos in the U.S. moved from Seattle to New York

The Donor Programme was established

Cryos was established in Aarhus, Denmark

Ole Schou spent most of his time researching

Founder Ole Schou had a dream about frozen sperm