Being a dad to a donor-conceived child: I’m lucky to be a father

Miranda and Johan from The Netherlands are parents to little Vidar. A quite normal family constellation – except for the fact that Vidar came to the world with a little help from a sperm donor. Here you can read about Johan’s journey to become a dad.

Because of the gene test and kitesurfing accident, Johan accepted the fact that he would probably never have children and was settled with that. However, when Johan met his girlfriend Miranda, things changed.

“My girlfriend was very independent and before we met, she had been researching the possibilities to have a child without a partner. She played handball on a high level and had not met the right guy until that point. When I met her, she had a clear plan to have a child, and she did not want to change that. So she involved me in the process.”

Johan and Miranda went on with the project with very different thoughts; Johan did not have a strong wish to have a child but Miranda wanted it very much and was excited about whether the fertility treatment would work.

“I never had a strong wish for a child. I like to do my own things and not plan when to do what. I had a lot of concerns starting the treatment and I thought there goes my freedom. When we agreed to do the procedure together I had doubts about a lot of things; will I like the child, can I be a good father and so on.”

Fertility treatment and choosing a donor

“The most important to us was to have a good feeling reading the donor profile, and also the reason why he wanted to be a donor. The donor had made a nice handwritten letter that we could relate to ourselves and he had a good emotional review. We looked for personality traits and characteristics that stood near to us; tall, friendly, healthy and really sporty.”

During the process, Johan got more and more enthusiastic, and a long time before Vidar was born, Miranda and Johan had everything ready for the baby to be a part of their family.

Being parents to a donor-conceived child

Now Johan and Miranda are proud parents of little Vidar.

“I never expected to be a father and now I am enjoying Vidar and am a proud father. I can teach him all the bad stuff I learned from my father! I am really looking forward to the future I have with this little man.”

Johan is very aware that he is lucky to be a father. Vidar was one of the first things Johan had to plan in his life, but it has been worth the effort. There are a few things that Johan would have liked to know before becoming a father which could possibly have saved him some of his concerns.

“I would like to have known before that it would be so fun and special. My life is changed, but not with regards to my freedom. Now I can teach the crazy and cool stuff I have done in my life to my son.”

When Johan is asked about how he feels about the fact that his son does not have his genes, Johan has a pretty clear answer:

“Honestly I am really glad that Vidar does not have my genes. There were few possibilities to have a child with my genes, and working as a medical professional, it became clear to me that it was better to use a donor to have a child. If Vidar was from my genes, he could have the same genetic problems and the risk for an unhealthy child was bigger.”

Not being genetically related does not affect Johan’s relationship with his son. Johan is convinced that Vidar will look like him anyways – for example with regards to his personality. 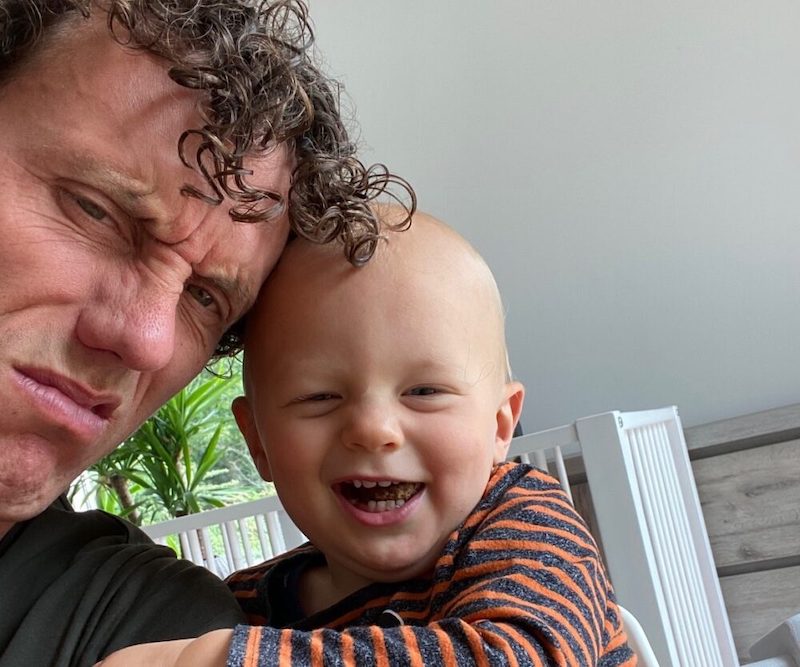 “I often hear that Vidar looks like me. It is really strange – he has straight blond hair and I have brown curly hair. But of course, he has some of my characteristics. The facial expressions are really the same and the way of making 'jokes' are also the same. Vidar feels the atmosphere around people – I have that too.”

Johan and his wife want to be completely open to their son regarding donor conception, and therefore, they have already mentioned that Vidar has come to the world with the help of a donor.

“I have a slogan in Dutch that I tell him often: Je bent niet van mijn zaadje, maar wel mijn maatje! (You are not from my sperm, but you are definitely my buddy)”

Johan and Miranda explain to their son that the donor is a kind man who donated his sperm to allow other people to have a healthy donor-conceived child.

Johan and Miranda actually hope that Vidar will want to reach out to the donor someday.

“We would actually be a little disappointed if he would not contact the sperm donor in the future. If he has questions or wants to visit the donor, we will help him in every possible way. We are also a little curious!”

Before having his son, Johan feared that he would not be able to handle the fact that his son did not have his genes. But that fear was put away immediately when he saw his son for the first time.

“The first moment I saw Vidar he was mine and I loved him. We are really down to earth people, but it felt like a miracle.”

When it comes to the future of his son, Johan only has a few concerns – and these are probably very similar to what other parents fear when their sons grow up; will there be a lot of broken things? A lot of scratches and wounds to heal? Or maybe even a little visit from a police officer?

“In my opinion, a father is a person that he will come to if he is sad, wants to discuss something or just play. I want to teach him the right things and make him a good and nice person. He has to know I will always be there for him.”

To other couples who are considering using a donor to have a child Johan says:

“I don’t know how it will feel to others, but my experience is that it feels like your own magic.”

A big thank you to Johan and Miranda for sharing their journey to become parents to little Vidar.

If you are considering to use a donor to have the dream of a baby come true, you are welcome to book a free call with one of Cryos’ Customer Care Consultants to know about your possibilities. We are ready to help you.