A personal coming out story - Signe from Cryos shares her story

At Cryos we celebrate Coming Out Day by sharing a personal coming out story from one of our own employees, Signe. Signe works as a Communication Specialist at Cryos, and by sharing her personal coming out story, she hopes to inspire others to speak openly about their sexuality and be proud of who they are. Also, Signe wants to assure other homosexual women, that the dream of a baby is within reach also when being in a relationship with another woman.

“I had dated boys until I was in the beginning of my twenties – just like my girlfriends did at the time. Looking back, I guess there were signs of my interest in girls, like secretly watching “The L Word". But at the time, I didn’t think about, why it caught my attention.

When I was 23, I volunteered as a tutor for exchange students at the university where I was studying. There were a lot of parties at the time, and one evening a French girl turned to me on the dance floor and asked me where to go out as a homosexual in Aarhus. I was so surprised that my immediate response was: “I’m not gay – how would I know that?” A silly reaction, because I knew, just like everyone else in my city, that there was just one place to go. She later told me that this reaction more or less confirmed her suspicion - that I could be into girls, but at the time, I had no clue myself. We did however have a special connection, and we started hanging out as friends outside the university.”

As Signe began spending more time with the French student, she started to think about what to wear and how to look when she was meeting her.

“This was when I began wondering about my behaviour and slowly, I put two and two together. When my friend was about to return to her home in France, I realized that I had feelings for her. The feelings turned out to be mutual, and this was how I started my first relationship with a girl.”

Coming out to a friend

The first time Signe came out to a friend was just before they were going on a five-week travel.

“I wanted to tell my friend before we went travelling together. Partly because she was so close to me, but also because I knew that this trip would be the chance for me to “test” my interest in women. We were going to meet a lot of people and attend parties far from home. This felt like a safe environment for me to try it out.”

Signe’s friend was cool with everything – and this was how most of her friends and family reacted. However, some were surprised that they hadn’t had a clue about it. In some sense coming out felt like an anti-climax to Signe. So much had happened inside her, but people just didn’t make a big deal out of it.

More than one coming out story

“Actually, I don’t just have one coming out story. Nobody does. It’s not like you tell someone, “Hey, I’m gay!” and then the whole world knows. You will have to tell a lot of people during your life – family, friends, co-workers and even strangers too – and you will probably meet all sorts of reactions. From the uncomfortable kind to the cute ones like my 80-year-old grandmother, who’s only concern was, if I’d still want children some day or if I had changed my mind about that too.

Coming out can be scary, and even today – being very confident and open about my sexuality - there are still moments, where my pulse races a bit faster, because I find myself in a situation, where I want or need to reveal that I am into girls. It’s not really a question of fearing what people might think – just the uncomfortable situation when they are surprised and try to apologize or explain, that they presumed that I was heterosexual.”

In a good position to understand Cryos’ customers

“At my first job interview at Cryos, I was asked what I thought about different family structures because this is a key issue for Cryos. I was happy to tell that I was homosexual and dreamed of starting a family with the help of a sperm donor someday. 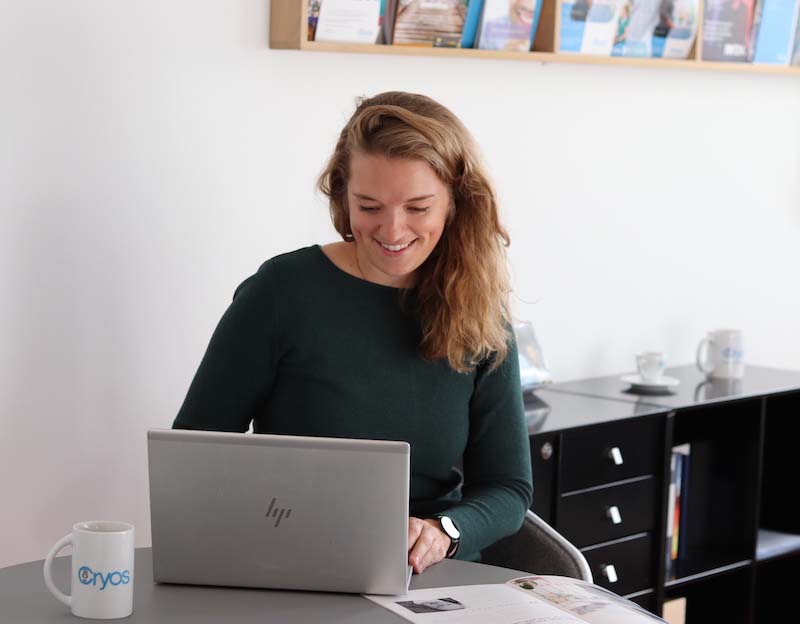 Being homosexual gives me a personal perspective in my job at Cryos. I am in a relationship with a woman, and we dream of starting a family together some day. Therefore, it is easy for me to relate to the Cryos customers who dream of becoming lesbian parents. Actually, working at Cryos is personal to a lot of us - I have a colleague who is a single mother and several colleagues who have had help to become parents or who live in an alternative family.”

Working for Cryos has made it easier for Signe to picture her own journey towards motherhood.

“Through my work at Cryos, I get to speak to a lot of people about starting a family with the help of a donor. I discuss many perspectives every day and I am convinced that this is going to be a help for me. For example, when my girlfriend and I are going to choose the type of donor we want for our child.

Working at a sperm bank also makes it very natural for me to have conversations with my girlfriend about having children. We already discuss many perspectives – it just comes naturally when we speak about my work. Things that we probably wouldn’t have spoken about at this stage, if it wasn’t for my job at Cryos.”

A mum no matter how the baby comes to the world

Signe and her girlfriend are settled that they want kids together someday. Both have always had that dream. They don’t know yet who will carry the baby in the future.

“We haven’t planned yet who is going to carry our baby. However, despite me always knowing that I wanted kids, I haven’t had this dream about being pregnant. Actually, before I even knew I was homosexual, I thought that adopting would be something for me to consider.

In the end, it is not really important for me who is going to carry the baby. I know that I will be a mum to our child no matter how he or she is going to be brought into the world.”

A huge thank you to our colleague Signe for sharing her personal coming out story.

If you want to start the journey to become a mum or two mums with the help of a sperm donor, you are welcome to contact Cryos’ Customer Care Consultants who are ready to help you on your path to parenthood.

You can also join our Facebook group Family Dreams where you can share experiences with like-minded people.