At Cryos we support all family forms, as we believe that everyone should be able to achieve their dream of having a child.  Fortunately, we have come a long way when it comes to giving LGBT+ persons the possibility of becoming parents. However, LGBT+ people around the world still face challenges and obstacles when wanting to become parents. Here are some of the most frequent challenges, we hear about.

Not all countries allow LGBT+ persons or couples access to fertility treatment with donor sperm or eggs. If this is the case in your country, you might consider other options, such as travelling abroad (also called fertility tourism). At Cryos, a 2021 customer survey shows that 20% of our lesbian customers were going to have fertility treatment in another country than where they live. If you want to read an example of this, we can recommend our blog post about Phoebe and her wife that travelled abroad to receive fertility treatment.

With a large network of fertility clinics around the world, Cryos will be happy to guide you in the right direction, in order to get the fertility treatment you wish for.

One of the most important steps in your journey towards becoming pregnant, is finding the right donor. Visit our free sperm donor search by clicking the button below.

The possibilities of being legally recognized as LGBT parents also differ from country to country. Some countries recognize a co-parent from birth, and other countries require a second-parent adoption. There is unfortunately still a lot of work to be done in this area. Several countries even have different laws for same-sex parents depending on whether they are male or female. Some countries sadly have laws against same-sex parents in general, making it impossible for both parents to be recognized as legal parents.

At Cryos we help a lot of same-sex couples become parents by offering donor sperm and eggs. In fact, about 35% of the persons ordering donor sperm from Cryos are lesbians. This means we have a great understanding and knowledge about what you are going through, and our Customer Care Team is ready to guide you about your possibilities and the legal aspects of sperm donation. 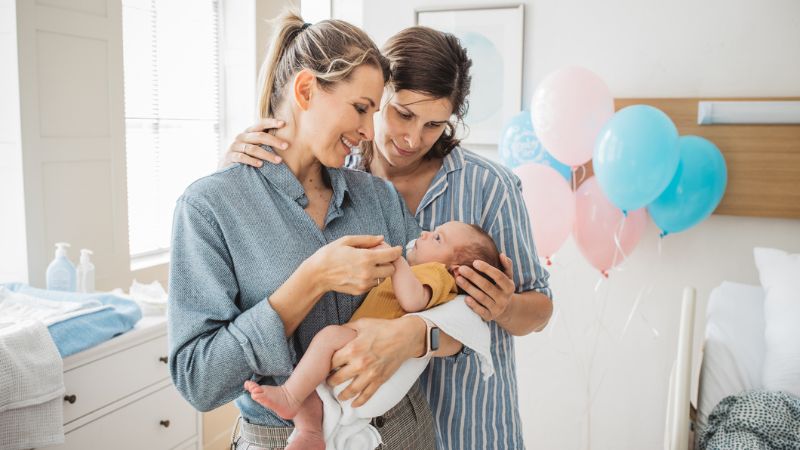 We are often asked about the possibilities of having reciprocal IVF, as this is an opportunity for lesbian or trans men couples to both biologically participate in a pregnancy. With reciprocal IVF, one partner acts as an egg donor to the other, who will then be pregnant with the partner’s egg. That is why this is sometimes also referred to as Partner IVF or double donation. The one “donating” the egg will of course be genetically related to the child, but there is also a belief that the body of the person carrying the child may also influence how certain genes are expressed in the child. The parent carrying the child will definitely have the biological connection that is formed via pregnancy, birth and breastfeeding of the child.

Some countries allow this type of treatment, while others, such as Denmark, only allow it if there is a medical reason for choosing this option. Contact Cryos to learn more about your options.

The well-being of children in LGBT+ families

Some LGBT persons are concerned about their future child’s well-being. Today, however, there are so many ways of starting and being a family, and LGBT persons and families are much more represented in movies and tv series than before. Children are therefore more used to seeing and meeting different family structures than earlier generations. And according to Susan Golombok, who is Professor of Family Research and Director of the Centre for Family Research at the University of Cambridge, there is no reason to worry about your child’s well-being in relation to your gender identity, sexual orientation, etc.

“Children thrive in all different kinds of families. What really matters is the quality of relationships between children and their parents. But also, how much their family is accepted in the wider society in which they live.” Susan further explains that, if anything, these mothers and fathers have better relationships with their children, most likely because it has been such a struggle for them to become parents, either because of fertility problems or because they had to battle against prejudices based on their sexuality or gender identity.

You can find some of the learnings from donor-conceived people here or read our blog post on rainbow and same-sex families. 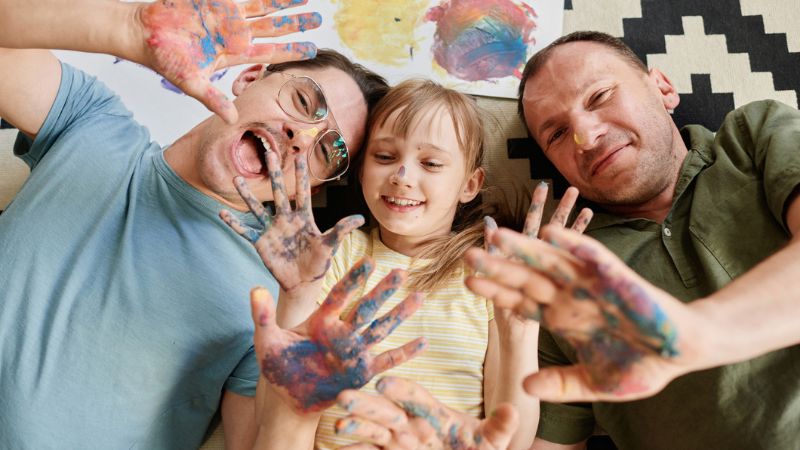 Concerns when becoming a non-biological parent

Some future LGBT parents seem to fear a lack of attachment to a child when becoming a non-biological parent. However, at Cryos we strongly believe that love makes a family, and that a natural attachment as well as unconditional love will be there, no matter how the child is conceived.

This belief is confirmed by all the happy parents who have conceived with help from a Cryos egg or sperm donor. One of them is Lisa, who in this blog post shares her story about being the non-biological mother to a donor child.

At Cryos we offer donor sperm and donor eggs for LGBT+ persons wanting to become parents. You can visit our free donor search to find a sperm donor or find an egg donor. Our local departments in Denmark, USA and Cyprus also offer help with fertility preservation, which gives you the option of freezing your own sperm or eggs before gender-affirming care. Contact our Customer Care Team to get personal guidance and learn more about your options.

Book a call with our Customer Care