PrivateBlogDiet and pregnancy – What can I eat and what should I avoid?
Pregnancy

Diet and pregnancy – What can I eat and what should I avoid? 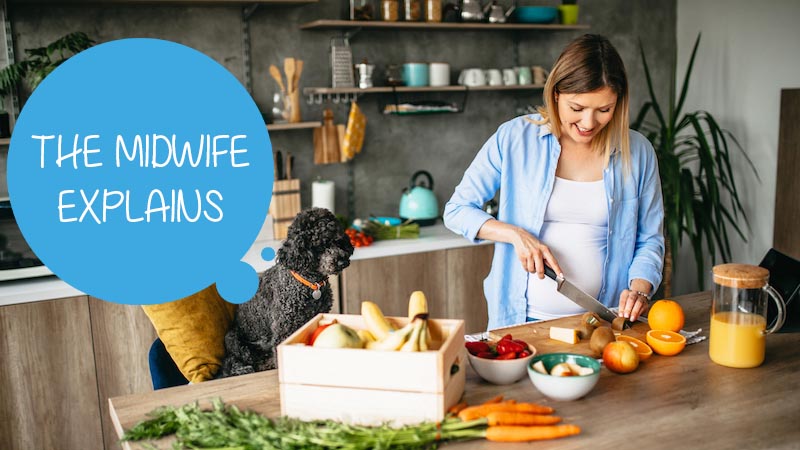 When you get pregnant, you will probably learn as one of the first things that there are certain types of food you should avoid or limit. While this can seem frustrating, there are luckily more things you can and should eat. Here Cryos’ midwife Julie explains exactly what you can eat and what you should avoid when you are pregnant.

Should I eat extra when I am pregnant?

It is important to eat healthy and varied when you are pregnant. However, it is not necessary to eat for two. The body only needs an extra 300 kcal a day. A normal-weight woman needs about 2000 kcal a day, so the additional amount of energy that pregnancy requires is only a small amount of extra food. 300 kcal is equivalent to three bananas or half a litre of skimmed milk. Some women find that their appetite is greater when they are pregnant. In that case, it would be a good idea to eat small, frequent, and healthy meals. Suggestions for these meals could be:

It is also a good idea to eat this type of small frequent meals if you suffer from nausea. It can help keep your nausea down.

During pregnancy, you will naturally gain weight as the baby gets bigger and your body changes.

The extra weight is distributed on the baby, amniotic fluid, the placenta and uterus, as well as increased blood volume and fat depots. Exactly how much weight you should gain is related to your weight and BMI before pregnancy.

You can see below how much weight you should preferably gain during the entire pregnancy. The largest weight gain takes place towards the end of the pregnancy. During this stage, you may gain 500 grams a week. 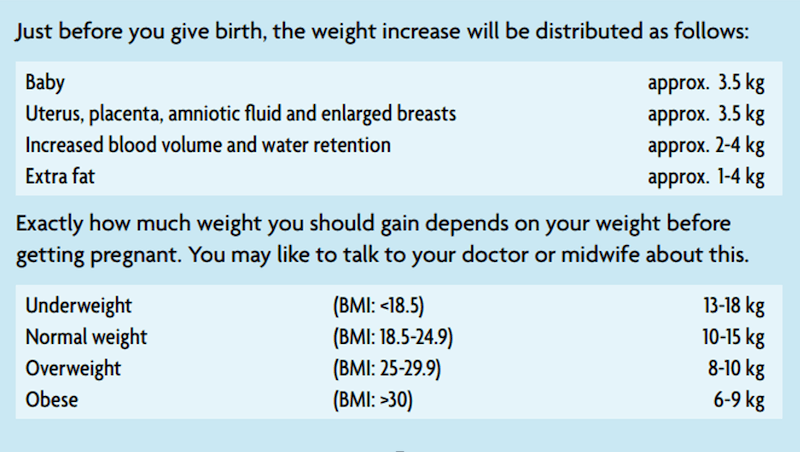 What to eat and what to avoid during pregnancy

You must plan your meals so you get all the extra protein, vitamins, and minerals your child needs.

Fish is healthy because it contains healthy oils and is a good source of vitamin D, iodine, and selenium, among other things. You should eat at least 350 grams of fish a week, of which 200 grams should be oily fish. You could for example eat plaice, flounder, cod, haddock, hake, fish roe, and oily fish such as herring and farmed salmon. 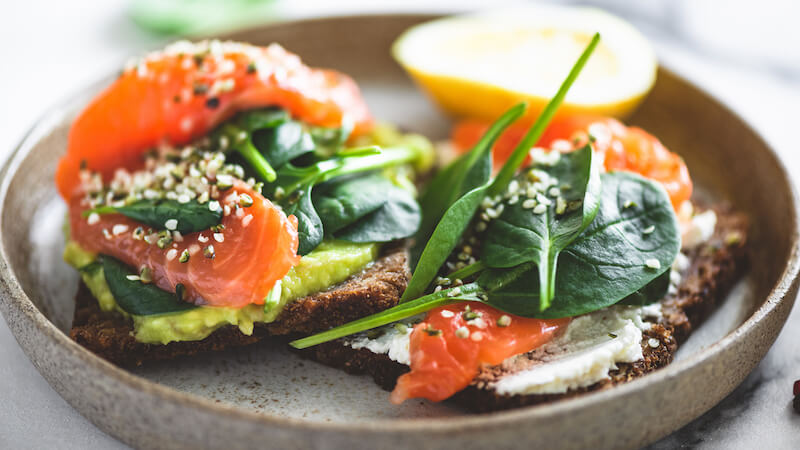 Rye bread with avocado and salmon is a healthy meal when you are pregnant.

Pregnant women and nursing mothers should not eat cuts of the large predatory fish because they may contain high levels of mercury. Predatory fish are for example rays, halibut, oilfish, swordfish, mackerel, shark, pike, perch, zander and tuna, such as tuna steaks. It is recommended that you eat a maximum of 1 regular can of tuna a week and that you avoid canned white tuna or albacore tuna. Eat no more than 125 grams of Baltic salmon a month, as it contains high levels of dioxins.

When you are pregnant, you should avoid raw/unprepared meat. Meat that has not been heated to at least 66º C for at least 3 minutes may contain toxoplasmosis, which can infect both you and your baby. Toxoplasmosis is caused by a parasite that is sometimes found in animal excrement and raw meat.

Can I eat sushi when I am pregnant?

A question I often get is: Can I eat sushi?. Sushi contains raw fish and we generally know that raw foods can contain bacteria and parasites. To be sure that the sushi does not contain bacteria and parasites, you must make sure that it has been frozen for 24 hours at minus 20 degrees. This is a legal requirement in some countries but be aware that this is not necessarily the case in all countries.

Liver and cod liver oil can contain large quantities of vitamin A which can harm your baby. Liver pâté and pâtés, in general, contain less vitamin A and are safe to eat.

You should not drink more than three cups of coffee a day and restrict your intake of other beverages which contain caffeine such as tea and cola. Studies have shown that large amounts of caffeine can affect your child's growth negatively. If you are curious about your child's growth, read our guide to baby’s development. 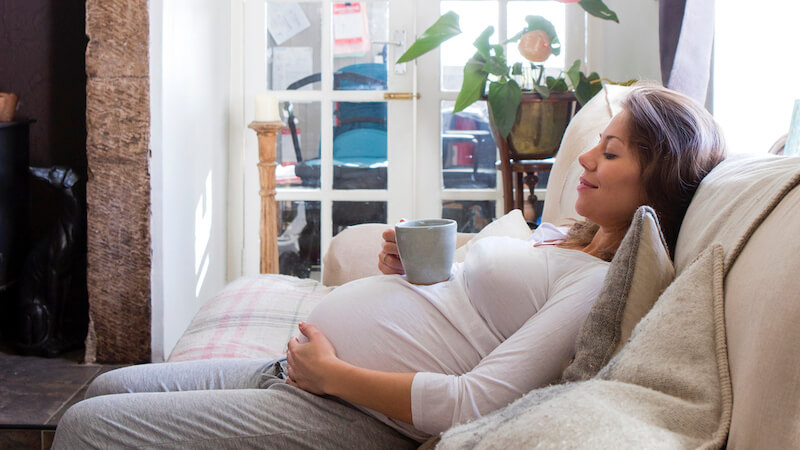 You should reduce your coffee intake during pregnancy.

As something new, pregnant women are advised not to take ginger shots and supplements that contain ginger. However, you can still eat foods that contain ginger, as the amount of ginger will be small compared to ginger shots and supplements with ginger. Recent studies conclude that it cannot be ruled out that large amounts of ginger can be harmful to the fetus.

Vitamins and supplements for pregnant women

Food is the best source of the nutrients that both mother and child need. It is important to get enough vitamins and minerals during your pregnancy.

Some vitamins and minerals can be difficult to get in the recommended amount – even through a healthy and varied diet. Therefore, it is recommended that pregnant women take the following dietary supplements:

Calcium supplements are recommended for pregnant women who do not get enough dairy products.

Fibre containing products and dairy products inhibit the absorption of iron. Therefore, you should take iron supplements alone or with citrus fruits such as oranges, as these improve iron absorption.

If you found this article about diet and pregnancy interesting and want to read more from our midwife, we can recommend our blog post on what you need to know before giving birth.