PrivateBlogEloise’s story: How using a sperm donor changed her and her husbands’ life
Parents to donor-conceived children, Infertility and treatment

Eloise’s story: How using a sperm donor changed her and her marrige

Eloise and her husband were looking forward to starting a family together when they got the devastating news that he did not produce any sperm. In this post, Eloise shares a very personal story about how she and her husband had their daughter and twins with the help of a sperm donor.

"My husband and I had been married for three years before we started trying for a baby. We used to talk in-depth about what they’d be called and what they’d be like. Circa May 2015 we thought: ‘Right, now is the time to get going!’ We shared feelings of both excitement and anticipation about whether we’d conceive that first month. I used to Google ‘ways to surprise your husband you’re pregnant’."

Months went by with no pregnancy

"Months went by and I started tracking my cycle, working out with excitement what the baby’s due date would be. At the six-month mark of no pregnancy, I was inconsolable every time my period arrived. My husband would say: ‘Just relax, it’s only been six months’. I’m a worrier and, although it hadn’t been long, I said: ‘Let’s have a fertility MOT’. The day of the test arrived."

The crushing news of azoospermia

"Nervously, I got on the bed for an internal scan. They confirmed straight away that my uterus looked ‘normal’ and my egg reserve was ‘in line with my age’. So off to work I went, relieved that all seemed fine. Lunchtime came and I knew my husband was being tested. I looked at my watch and thought how strange it was that I hadn’t heard from him. Eventually, I did… and just like that, we were given the crushing news that he has azoospermia (zero sperm). Our world came crashing down."

"The next few weeks were a blur of raw emotion. After weeks of testing, it became clear that my husband would need to undergo very painful surgery to see whether they could extract any sperm. This procedure is known as MICRO-Tese and we soon discovered a surgeon in New York who has the best success rate. I needed to undergo IVF in New York to extract my eggs in tandem with my husband’s surgery, ready for fertilisation. The whole process would take three weeks. With a date in the diary, I wrote a very detailed timing plan and was kept busy by huge preparations for our trip to the States."

"We also spent two challenging months picking a sperm donor (in case my husband’s operation failed). However, the daunting and emotionally raw process was made easier by the detailed information the sperm bank was able to provide to help us in our selection. This included physical features, their family background, a full medical report, photos and a letter from the donor. At last, after much deliberation, we had our donor."

We were guided through the process of shipping donor sperm by the sperm bank and hospital, with certain forms and signatures to complete."

Donor sperm as a back-up plan

"Touching down in New York, I had mixed feelings. Having become engaged there, it felt fitting as well as sad that we were back there to try and make a baby. IVF stimulation started. My husband’s operation was determined by the date of my egg retrieval, as it needed to be the day before. The surgeon had said that his op would take roughly two hours but it took five; the surgeon came in with his head hung low and removed his face mask to confirm our worst fears that the operation had not been a success, although they were watching the tissue overnight (just in case). We were obviously devastated, having been so optimistic, determined and strong and my husband was in considerable pain.

We didn’t know until ten minutes before I was sedated for my egg collection that my husband’s sperm wouldn’t be viable and that the route we needed to pursue was with the donor sperm. We were sad but also grateful to have that back-up hopefully to give us the family we so desperately longed for."

"The next morning came and it was confirmed that 12/12 of my eggs had fertilised with our donor sperm. Fast-forward two weeks after the transfer of two three-day-old embryos and, back in the UK, it was Easter Sunday. Despite the nurses having said to wait for the blood test, we tested early. We sat nervously watching the flashing icon, waiting for the result… then it popped up: ‘NOT PREGNANT’.

After our first failed attempt, I was totally convinced it wasn’t going to work. A few months later in New York, we transferred both frozen embryos. Once again back in the UK, the two-week wait was a dark time. I went to see a hypnotherapist to help with my mental state, which truly made me feel more relaxed… My husband didn’t want me doing a home pregnancy test because the first failed attempt was so awful."

"When the day came for my blood test, I had to wait six hours for the results via the phone. I answered the phone shaking and immediately blurted out: ‘It hasn’t worked has it’ and the nurse replied, ‘YES, IT HAS’! We then had the pregnancy confirmed by a scan at 6 weeks and learned that it was not twins. At last, in February 2017, our first daughter was born. She is about to turn three and completely rocks our world."

Wish for a sibling

"When she was almost a year old, we decided to try and make more embryos, as we had none left for a sibling, but we did have more vials of our donor’s sperm left for this purpose. I spent the four months leading up to this fresh IVF cycle preparing my body.

January 2018 and the IVF stimulation started all over again, back in snowy, stormy New York. This time fewer eggs, I was concerned but kept reminding myself it’s quality, not quantity that’s important.

Transfer day came and miraculously three out of eight fertilised embryos were looking great by blastocyst stage, Day 5. Again, I assumed it wouldn’t work ‘fresh’ because it didn’t the first time with our daughter. Our specialist had called and advised we transferred two embryos because one was doing better than the other. We agreed to take her advice (deep down I was really hoping for twins). The next ten days waiting to test were a complete blur: I woke up one morning at 4am and ran into the bathroom and grabbed the emergency pregnancy test."

If you are like Eloise and realy want to have twins, we can recommend you to read this blog post on how to increase your chances of having twins. 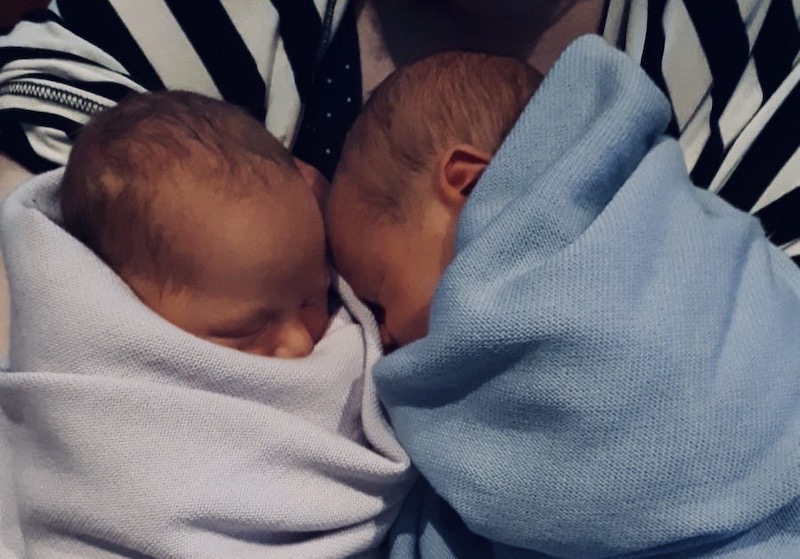 "BANG! Two VERY strong lines appeared immediately! Blood tests then confirmed I was pregnant. This time I felt different, my HCG hormone levels came back four times higher than my previous pregnancy and I was being physically sick from 4 Weeks, as well as waking up in the night starving! There we have it: after nine long and extremely hot months during the peak of 2018’s UK summer heatwave, our twins were born at 37.5 Weeks, both healthy and gorgeous. I still pinch myself as if this isn’t real."

A fertility hub to support others on their fertility journey

"During our journey, my husband and I wished that we could have found useful and reliable resources, support and information in one non-overwhelming place. So, having experienced a difficult route to parenthood first-hand, I decided to set up Fertility Help Hub. It’s a fertility lifestyle platform for couples trying to conceive - an oasis of fertility knowledge and resources, consisting of an informative and inspirational website, an e-newsletter magazine and a social community, offering expert fertility tips, advice, support and key resources. Through my work with Fertility Help Hub, I want to help break the stigma, so people don’t have to suffer in silence and spend hours on Google feeling overwhelmed like we did. You can check it out here and see what we are up to on Instagram and Facebook too."

We would like to thank Eloise for sharing her touching personal story with us. If you liked this post, you may also be interested in reading the story about how Toyah and her husband had three boys thanks to a Cryos sperm donor.