Have you ever wondered how a sperm bank stores the sperm? And what “washed” sperm means? Here you can read 10 interesting facts about donor sperm.

1. How is donor sperm stored?

Cryos stores donor sperm in secured tanks with liquid nitrogen at -196 degrees. Some people ask us if they can store the sperm in their own freezer… Unfortunately, a freezer is only -18 degrees and therefore it is far from cold enough for sperm cells to survive.

2. Why use a sperm donor to become pregnant?

There are three main groups of people to answer the question; why us a sperm donor? The groups are heterosexual couples experiencing problems with infertility, lesbian couples and an increasing number of single women who have decided to become a single mother by choice and create a family without a partner.

3. What is the difference between “washed” and “unwashed” sperm?

Unwashed sperm contains all the natural fluids that are present in a man’s ejaculate and the only preparation that has been made is to add the cryo-preservative that makes the sperm ready to survive to freeze.

4. What is the difference between a Non-ID Release and an ID Release donor?

An ID Release donor means that a child will get the opportunity to receive the sperm donor’s last known address, name and birth date when the child turns 18.

5. How much sperm is enough for a pregnancy?

This is a more tricky question because this is dependent on the type of treatment the patient is going through and what the fertility clinic prefers. For an IUI treatment, Cryos recommend using 1 MOT 10 (or higher) sperm straw. This means that there is 10 million sperm cells pr. millilitre sperm. In the end, only one single sperm cell is needed to fertilise the egg.

If you want to learn more about sperm motility and quality, we can recommend following the link. 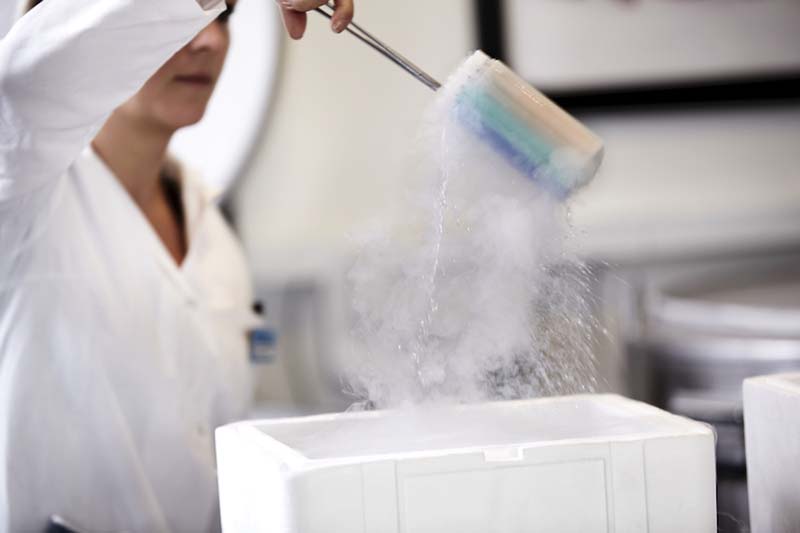 Men of all ethnicities and races can become sperm donors. However, all donors must be physically and mentally healthy and go through an extensive screening program before being accepted and start donating at Cryos. Of course, they should also have really good sperm quality. Applicants with a family history of serious hereditary mental or physical diseases cannot become sperm donors.

7. What is the age limit for sperm donors?

Donors at Cryos must be between 18 and 45 years of age. After the age of 45, men’s sperm quality starts to decrease, and therefore, there is an age limit to being a donor. However, this does not mean that a man has bad sperm quality after 45.

8. How much are sperm donors compensated for their donations?

Sperm donors get compensation for their time and transportation each time they donate. The amount is approximately 50 EUR for each donation.

9. Can you see pictures of sperm donors?

10. Does a sperm donor have parental rights?

If you found this blog post interesting, we can recommend you to take a look at our blog post about misconceptions on donor sperm.