The two Danish women, Helga and Maria, knew from the beginning of their relationship that they wanted to have children together and that they wanted to give birth to two children each. But what they didn’t know from the beginning was how to make that dream come true. Here, you can read the story about how the lesbian couple Helga and Maria became a family of two mums and four children.

A newspaper article gave life to the dream

“We have always wanted to have children. When we worked together at a day nursery for children in Oslo, we both realized how much we wanted to have children, and we got confirmed that wanted to have them together. Though, at that time we didn’t know how we were going to fulfil our dream of becoming mums. At least not until Helga stumbled upon an article about a couple who had used a fertility clinic. The article made us dream about the future, and the hope about realizing our dream to become a big family grew bigger.”

In the summer of 2001, we went to Copenhagen to look at the fertility clinic. Both of us remember how we visited the clinic and afterwards went to the city hall square where we found a calendar and began to plan the next years of our life. Who was going to be pregnant first, and what would be the best timing considering our studies and maternity leave?”

If you, unlike Helga and Maria, are not sure which of you is going to carry the child, we can recommend you follow the link to our blog post on the subject.

The sperm donor was chosen

“By now, we had known each other for many years and we really just wanted to get going with project baby. Quickly, we decided that it was Maria who should carry our first child. We arranged a meeting with the fertility clinic and by the time we left the clinic, we had decided on a sperm donor and scheduled the insemination. Back in 2001, it was only possible to be inseminated with sperm from an anonymous donor (ed. Non-ID Release Donor), but we had the possibility to influence factors such as height, weight and hair colour, and we chose a donor who matched Maria.”

Pregnant in the first attempt

“We knew that there was a risk that it was going to be a long process to get pregnant. We had prepared as much as we could, and we had read loads of articles about pregnancy. Maria was inseminated in October 2001, the week after we had come out as a lesbian couple. It was crazy, but at the same time, it just felt incredibly right.

The days went by and we took a lot of pregnancy tests. Maria got pregnant in the first attempt and we were so happy. We were some of the first among our friends to soon become a family, and we got so much support and that was an amazing feeling of happiness.

The months passed and the pregnancy progressed as planned, but the delivery wasn’t as easy. Little Ida was facing the wrong way, so we ended up having an emergency caesarean and 16 days of hospitalization.”

Could the same donor be used for siblings?

“After Ida was born, we started thinking about if perhaps there was more donor sperm from our donor? We couldn’t give our children a father, but we could give them a common origin by using the same donor, and we thought that was important. We thought that later in life it would mean something for our children and their sense of connectedness if they had commonalities in relation to their thoughts, interests and way of being.

Luckily, there was more donor sperm from the same donor, and as a blessing in disguise we had just gotten a serious check from our insurance company due to water damage, and we spent every single penny on sperm from our donor. All 28 straws were waiting for us – there was no guarantee that the following inseminations would go as easily as the first one so we thought that it would be good to have a little stock.”

Pregnant in the first attempt – again!

“After about a year, we took a look at our calendars again and decided that it was about time for Helga’s insemination. This time, the insemination was a bit trickier since the logistics with having to match train times to Copenhagen with Helga’s ovulation made it difficult. We were told at the clinic that we had been lucky the first time and that women often have to be inseminated 5, 6 and maybe even more times before getting pregnant.

We took many pregnancy tests after the insemination and it was positive again. For the second time, we had succeeded with getting pregnant in the first attempt, and Helga gave birth to our son Elias 9 months after. We followed our plan – two children with two years in between.”

The last piece in the puzzle fell into place

“After the birth of Julie, we took a long break from pregnancy, birth and breastfeeding. That was not part of our plan since we wanted a 2-year gap between all our children, but the timing just wasn’t right for us at that point, so we postponed it a bit. In fact, 6 years ended up passing by before we felt ready again. We had our two girls and a boy, and to fulfil our plan we just needed the last boy.

Helga was inseminated in 2012 and this time we also hit jackpot in the first attempt. In January 2013, we held our last piece in the puzzle in our hands – our little Emmelie. 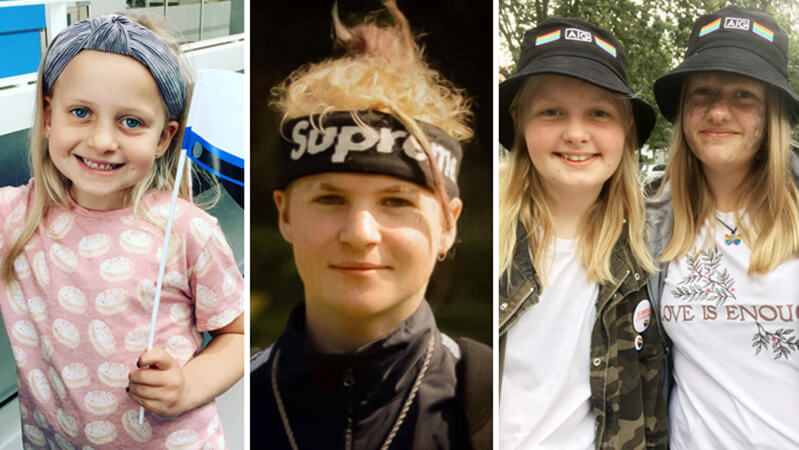 Honesty and openness towards the children

“Ever since the kids were small, we have talked to them about the importance of being able to have an open and honest dialogue about how it is for them to grow up with two mums. We wrote a book to our firstborn child, Ida, with thoughts and reflections about our choice in relation to making a family along with emotional stories from the pregnancy. We thought that when she grew older, she would be interested in reading about our thoughts from the beginning of the process till we had her in our arms.”

Why does Ida have two mums?

“When the children were smaller, we helped them tell their story when the other children in the kindergarten asked questions. Children are so direct and express what they see. We have gotten the question “why does Ida have two moms?” many times and we have explained our situation, often multiple times, since children sometimes need to hear things more than once to fully understand.”

Family is all about love

“In our jobs as pedagogues, we make a big deal out of embracing that families are different and that there is no right or wrong as long as there is love. We would like to contribute to giving children a more nuanced view on family forms. Children are, unlike adults, not as prejudiced so they are easier to educate and influence with new insights and knowledge. It is so important that we, as adults, do not define what is right or wrong on behalf of our children.”

A moving visit at the fertility clinic

“When the children were younger, we participated in an event for donor children at the fertility clinic every year. Here, our children could meet other children who also had two mums. Last summer, we all visited the fertility clinic again. It was a moving visit for us, and we felt that it meant something for our three oldest children too. Our children had many questions and they felt like they were a part of something bigger. Us mums were touched by seeing those who were sitting in the waiting room full of excitement and expectations as they were on their way to start a family, just like we were 17 years ago. Now, we were sitting there with our lovely children and our wonderful rainbow life. The woman who showed us around at the clinic also had to shed a tear since it was a meaningful meeting for her too.”

It is okay to talk about frustrations

“After our children have grown older, we have stressed that it is more than okay to talk openly about any frustrations they might experience or feel in relation to growing up in a rainbow family. It has always been important to us that our children know that we are open about everything and that it is 100% okay to say exactly how they feel about the decisions we have made. Our experience is that our children have found it very natural. They haven’t felt any different or wrong, and there hasn’t been any moment of their lives where they have wished for something else. Because as they say: “We have never tried anything else”.

We have especially paid attention to our son, the only boy in the group. It is a bit special for him to grow up among 5 girls. Though, he doesn’t think that he has missed out on anything. Sometimes we sent him on a boys-trip with his uncle because some things are just easier to talk about with an uncle.

Our oldest daughter came the other day and told us that she had signed herself up to be a part of the organisation Sex & Society. It is a big interest of hers to go out and tell others how it has been for her to grow up in a rainbow family. It is safe to say that we are proud that this means something to her.”

A big thank you to Helga, Maria and their children for sharing their lovely story with us.

If you are curious about the process of how lesbian couples can fulfil their dream of a baby, then follow the link to read all about it and the different possibilities for you and your partner. You can also read this story you might also be interested to read about how the lesbian couple Lisa and Lynsey became mothers.