ClientBlogOvulation - All You Need to Know and More
Infertility, Home Insemination, Fertility treatment

Ovulation - All You Need to Know and More

Ovulation is one of the most important things a woman should know about her body; it is the determining factor in getting pregnant. Understanding how it works helps you be in charge of your health and feel more confident in your body's ability when you are trying to conceive.

Many guides and tools are available for tracking your ovulation, but before we suggest a few, Cryos wants to make sure you know and truly understand what ovulation is and how it works.

What is Ovulation? How Does It Work?

Ovulation occurs when the ovary releases a mature egg. The egg breaks through the ovary wall and travels down the Fallopian tube, where it can be fertilized. This process happens once every month for most women.

2) How Does Ovulation Work?

Stage (1) Menstrual cycle: Estrogen and progesterone levels are low when your menses (period) begins. Your period starts when the thickened uterine wall lining starts shedding. Typically, periods last between four to seven days, although it can be shorter or longer, as each woman is different.

Stage (2) Follicular (AKA Pre-Ovulatory) Phase: This stage begins on the first day of your period, and lasts approximately 10-17 days.

During this time the pituitary glands sends various signals out that adjust your hormone levels. This includes the Follicle Stimulating Hormone (FSH). The FSH triggers your follicles to develop into mature eggs. One dominant follicle will develop to become one mature egg, while the other follicles disintegrate. Before the mature egg is released from the ovary, the lining of your uterus will thicken to prepare for the possible implantation of the mature egg.

Stage (3) Ovulatory Phase: Ovulation happens mid-cycle in response to a peak in estrogen. This can occur on any day of the Follicular phase above. The estrogen peak triggers a Luteinizing Hormone (LH) to be released. This is called the LH surge. This surge causes the egg to push through the ovarian wall which takes between 24-36 hours. The egg then makes its way to the Fallopian tube where it can be fertilized. This is the optimal time for insemination.

Stage (4) Luteal Phase: This stage lasts approximately 14 days and marks a decrease in the FSH. If a fertilized egg has not attached itself to the uterine wall during this stage, the unfertilized egg will be reabsorbed into the uterine lining and your menstrual cycle will start again.

This helpful graph depicts the average 28-day menstrual cycle, including the days of menstruation and peak ovulation. It is important to remember that this is an average and many women have menstrual cycles that are longer or are shorter than this timeline. 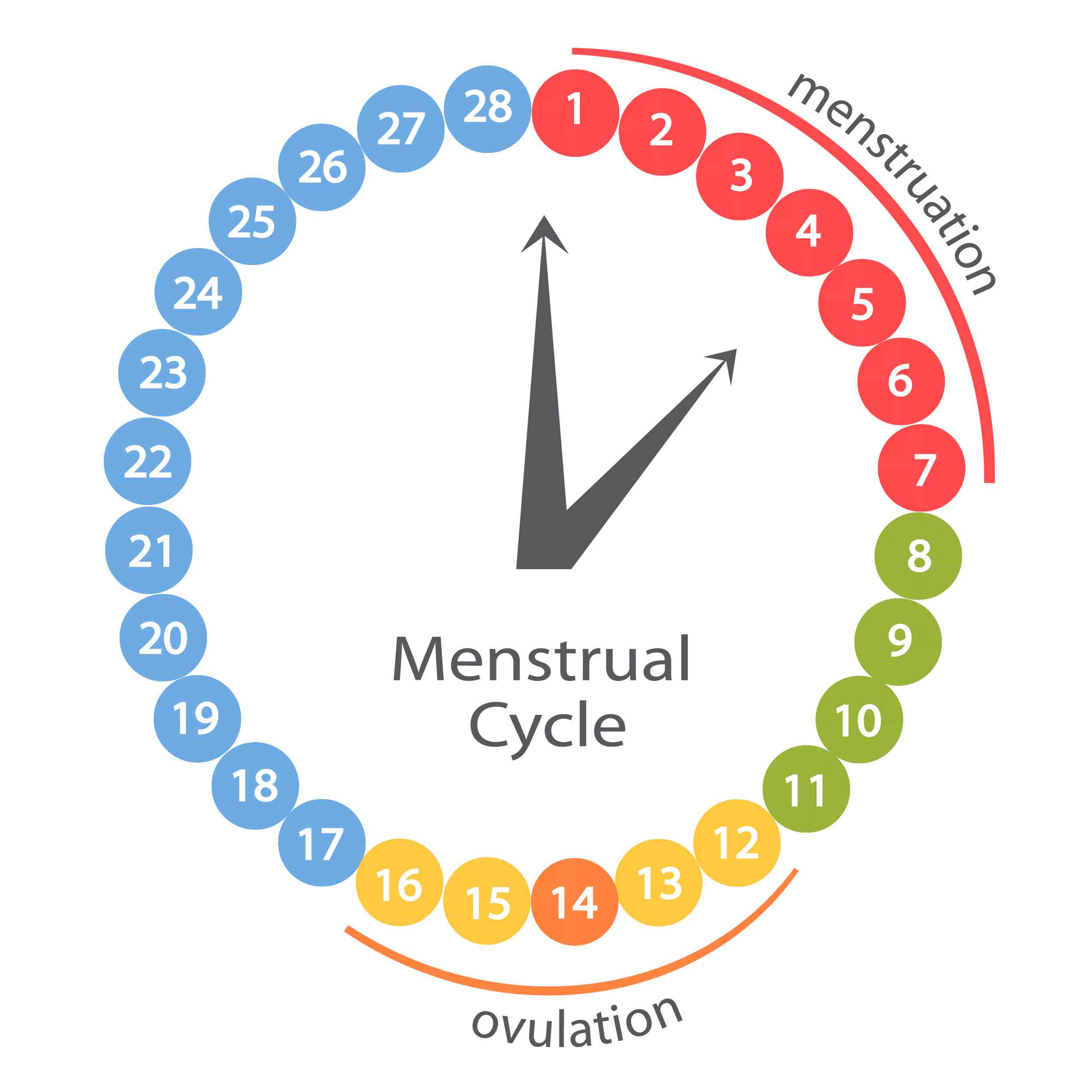 How Do You Track Ovulation?

To calculate when you are ovulating, start with the first day of your last menstrual period (LMP) or by calculating 12 - 16 days from the next expected period. Find your most "fertile time" of your cycle, which is usually between day 11 - day 21, from the first day of your LMP. Every woman's body is different, so ovulation may occur on a different day each month and at different times during your cycle. This makes it necessary to track your ovulation carefully, especially if you are doing a home insemination.

There are many ways to track ovulation. It is recommended that you use more than one method to increase your chances of correctly predicting your ovulating. Relying on a mobile app alone to track your ovulation is inadvisable, as it can be difficult to track your exact cycle. Even when it has several months worth of data,  the app is only a tool, it is preferable to combine this information with another method of testing such as using ovulation testing strips.

Methods of ovulation tracking include:

Graph - When Should You Inseminate?

The graph below shows the likelihood (in percentages) of conceiving via insemination on the days leading up to peak ovulation. When using an Ovulation Predictor Kit (OPK), you are looking to get a positive result for your LH surge. This is typically 36 hours prior to ovulation, but can be between 24 - 48 hours.

As the graph shows, the days between your LH surge and ovulation (when your egg breaks through the ovary wall and drops to the Fallopian tube) are your most fertile window.

Your egg drops during ovulation and lives for only 24 hours, so your chances of conception drop down to 0% the day after ovulation.

This shows the pitfalls of starting too early or waiting too late to inseminate. Many women need several tries to get it right. The recommended amount of sperm you should purchase for your home insemination is two ICI or IUI MOT10 straws.

Having two straws allows you the ability to space apart your insemination and wrap around your fertile window for a better chance at getting your timing correct. We recommend inseminating 12 hours apart for the best chance of catching your egg. 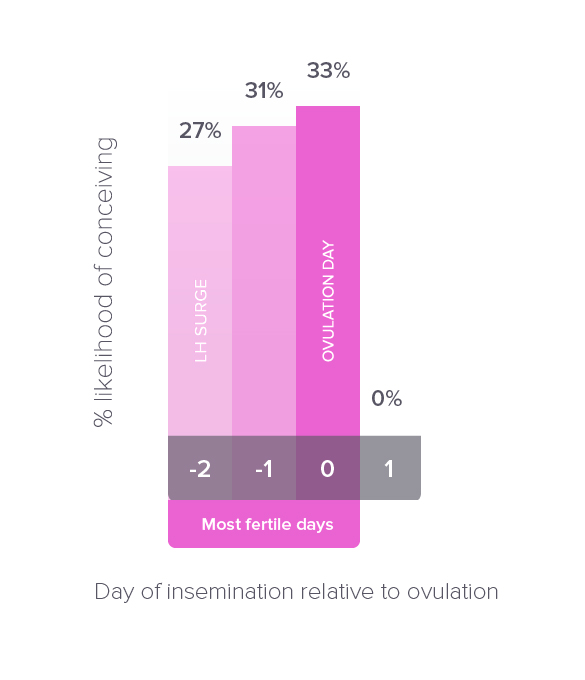 If you have any questions about ovulation and home insemination our friendly Customer Care Team is available by phone (407)-203-1175, email [email protected] or chat on our website. You can also read more on womens fertility and egg qyuality, by following the link to our blog post on the subject. They are available Monday - Friday, 8 AM - 9 PM (ET).

Cryos is here to help you by providing services that make it possible for your dreams to become a reality.