Ovulation Tracking & When To Inseminate

Ovulation is key when it comes to conceiving a child. Tracking your ovulation and understanding your “fertile window” can provide great benefits to your pregnancy journey. Read along to learn how to track your ovulation.

Ovulation occurs around the 14th day of your menstrual cycle, and it means a follicle has matured into an egg while being released from the ovaries into the fallopian tubes. The egg is released so it can become fertilized, develop into an embryo, and implant as signs of pregnancy.

If you want to learn more about ovulation, you can follow the link to our blog post What is ovulation? – All you need to know about the ovulation cycle.

How to track ovulation

To calculate when you might be ovulating, approximate 12 to 16 days from the first day of your last menstrual period (LMP) and your next expected period. The most fertile time of your cycle is usually between day 11 to 21 from the first day of your LMP. Every woman's body is different, and ovulation may occur on different days and different times in each cycle. This makes it necessary to track your ovulation carefully instead of guessing it, especially if you are doing at home insemination.

There are many ways to track your ovulation, but it is recommended that you use more than one method to increase your chances of correctly predicting when you’ll be ovulating. Relying on a mobile app alone to track your ovulation is not advisable. Even when it has several months’ worth of data, the app is only a tool. It is preferable to combine this information with another method such as ovulation testing strips.

What testing can teach you

Knowing the average length of your ovulation cycle can improve the chances of becoming pregnant. Testing your cycle with Ovulation Predictor Kits (OPKs) for three months or longer prior to inseminating will help determine when ovulation will occur. OPKs plus other testing methods such as cervical mucus tests, and basal body temperature can help provide a more accurate prediction of ovulation.

According to American Pregnancy.org, sperm can live up to 5 days in a woman’s reproductive tract. At Cryos, we suggest wrapping insemination around your most fertile time by selecting two MOT 10 straws and inseminating 12 and 24 hours after your first detection of an LH surge. Note that the test line must be as dark or darker than the control line in order for it to be a positive as evidenced in the pictures below. While frozen sperm can live up to 72 hours, we suggest using it at its highest potency which is within the first 36 hours after thawing. 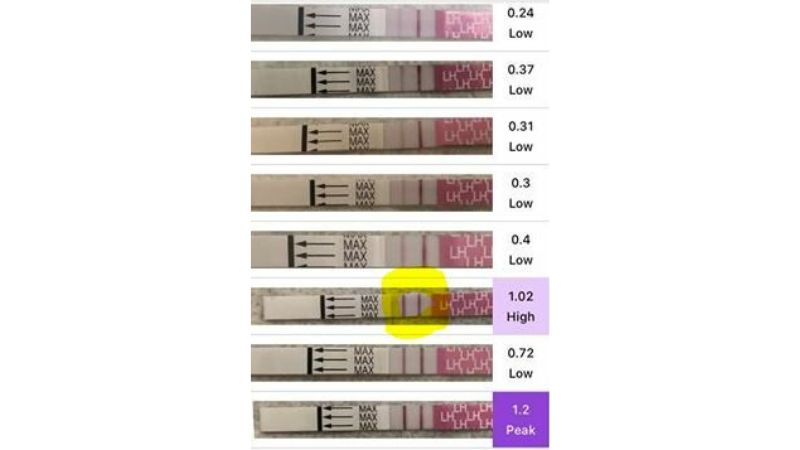 Begin testing the day after your period ends once a day until you see a faint line. Four days before your midpoint you can test several times a day until you get your first positive (see the highlighted test above).

Tools to track your ovulation

The graph below shows the likelihood of conceiving via insemination on the days leading up to peak ovulation. When using an Ovulation Predictor Kit (OPK), you are looking to get a positive result for an LH surge. This is typically 36 hours prior to ovulation but can be between 24 - 48 hours as well. As the graph shows, the days between your LH surge and ovulation (when your egg breaks through the ovary wall and drops to the fallopian tube) are your most fertile day. These days are the so called “fertile window”. 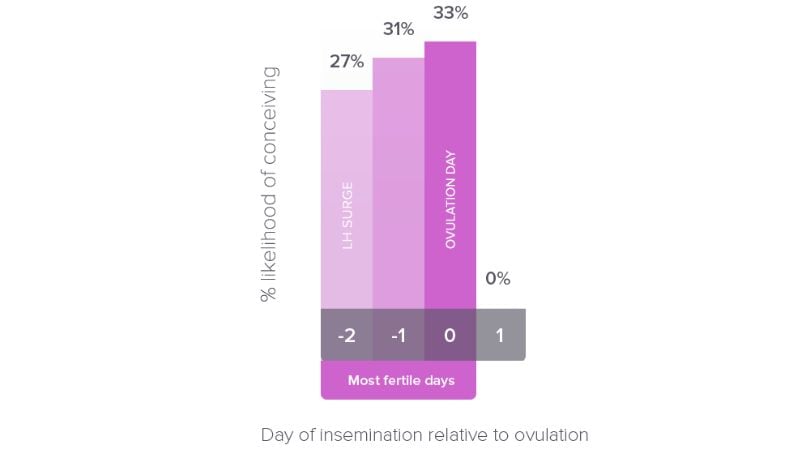 After your egg drops during ovulation, it lives only for 24 hours. This means your chances of conception drop down to 0% the day after ovulation. Starting too early or waiting too long to inseminate could prevent you from getting pregnant.

Since you may need several tries to get it right, another important thing to consider is the amount of sperm you should purchase for your home insemination. We recommend two ICI or IUI MOT10 sperm straws to space out your insemination along your predicted fertile window. Inseminating one straw the moment you get your first LH surge positive and the second straw 12 hours after the first insemination, may increase your success rates.

If you have any questions or would like additional information, please contact us. Our Customer Care Team is ready to help you via phone at +1 (407) 203 1175, via e-mail at [email protected], or via live chat on our website. They are available Monday - Friday, 8 AM - 9 PM (ET).

Cryos is here to help you by providing services that make it possible for your baby dreams to become a reality!