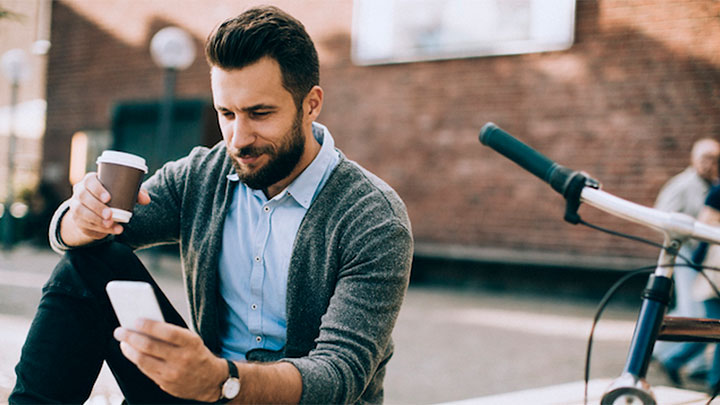 Donors with an Extended Profile are registered with an alias, such as ERIK, GILES, or ARAM. This is not the real name of the donor.

The Extended Profile includes information about his education, family background, personality, hobbies and interests. Additionally, the profiles contain a photo of the donor as a child, an emotional intelligence (EQ) profile, a handwritten message and a voice recording. Some of the ID Release Donors with Extended Profiles have also provided photos of themselves as an adult. 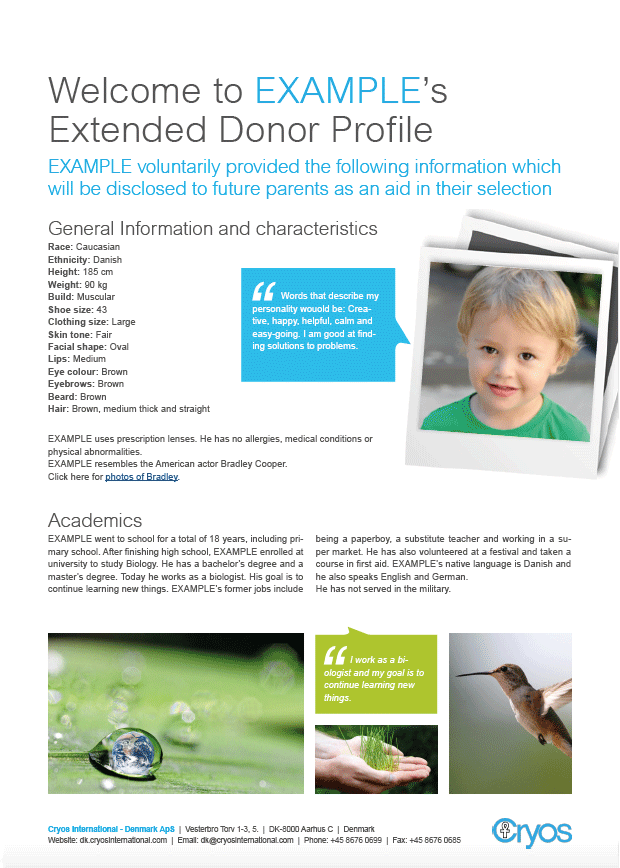 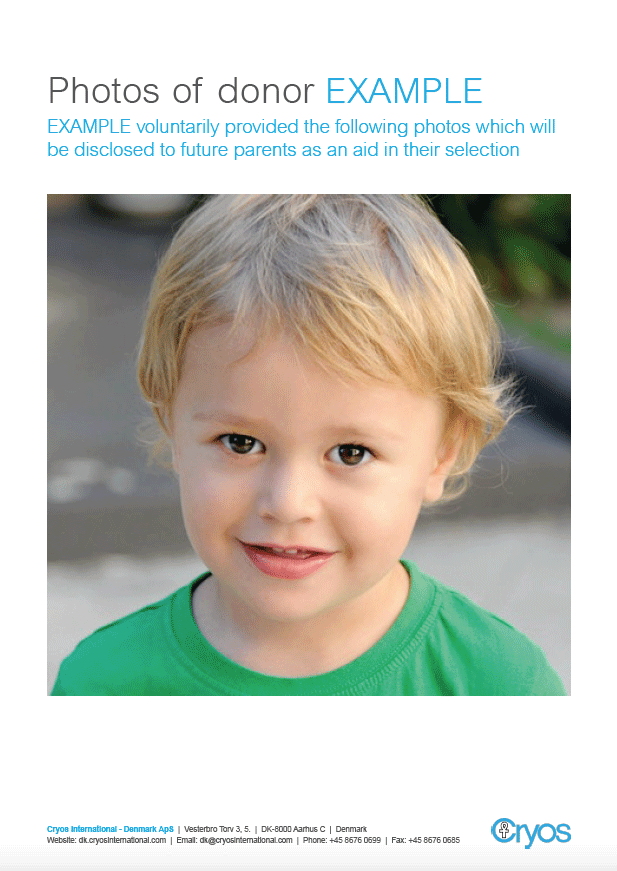 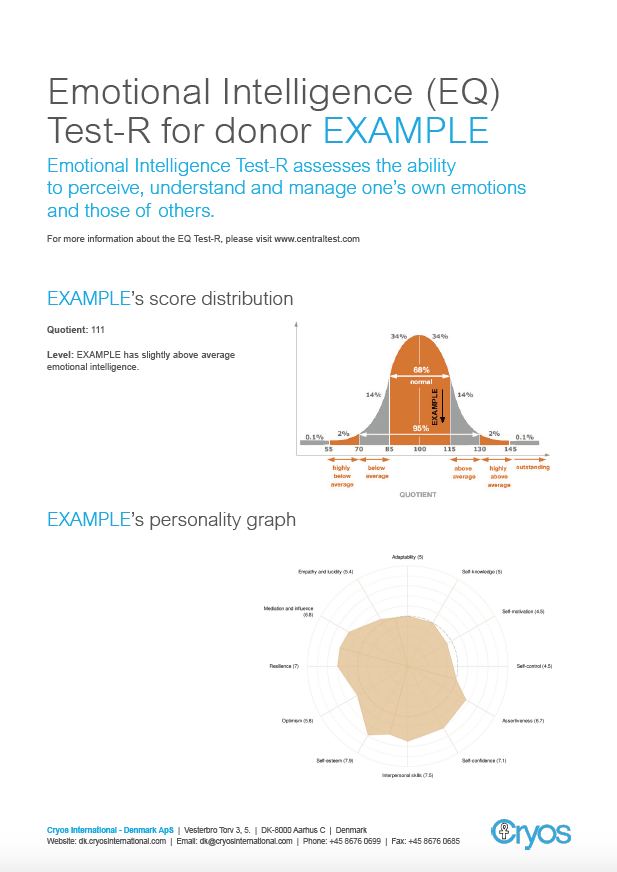 By choosing an Extended Sperm Donor Profile, you get the opportunity to enrich the conversation you have with your child about his/her genetic origin.

At Cryos, we have both Non-ID Release and ID Release Sperm Donors for you to choose from. The decision between using an Non-ID Release or a ID Release Donor is very individual, and can be affected by both personal preferences, beliefs and the legislation in your country of treatment.

When choosing your sperm donor, one of the first considerations to make is whether to go with an Non-ID Release or a ID Release Donor. The decision can be based on ethical beliefs or personal circumstances, but it can also be dependent on regulatory restrictions in your country of treatment. 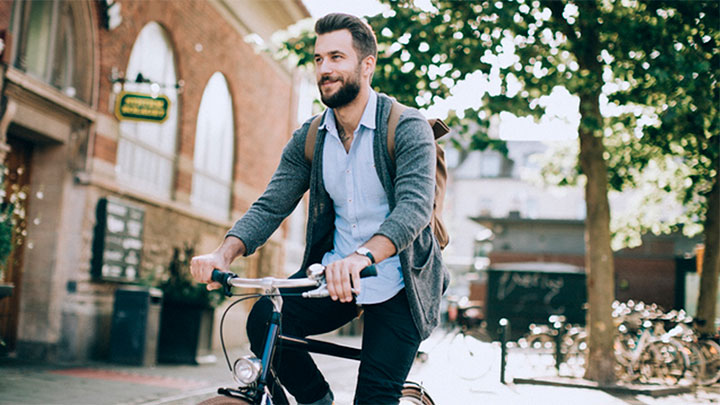 Even after 30 years of sperm donation, the question about donor Non-ID Release or ID Release is still widely debated all over the world. This means that some countries allow people to use both Non-ID Release and ID Releases Donors and other countries only allow one or the other.

To make sure you stay compliant with the rules, we recommend that you check the regulations in your country of treatment before deciding on your donor. Usually, your fertility clinic can inform you about the current regulation. Otherwise you are also welcome to contact Cryos’ Clinic Account Team.

The donor has made the choice of being Non-ID Release himself, and he has agreed not to contact the potential donor children. Likewise, the client agrees through the Terms of Agreement, not to attempt to contact the donor in the future.

Nevertheless, donor sperm carry DNA and therefore, there is always a risk that donors, clients and children can trace or be traced via DNA-analysis which can compromise the privacy.

Why choose an Non-ID Release Donor?

There may be various reasons to choose an Non-ID Release Donor. Maybe you do not want to know too much about the donor, or you have no wish for your child to meet him in the future. Some families may view sperm donation as a means to complete the dream of having a family and therefore, they do not wish for the donor to have a role in the child’s life in the future. Other people do only have the option of having an Non-ID Release Donor due to regulations in their country. Regardless of your reason, the decision is very personal and only you know what is the right decision for you.

A ID Release Donor is identifiable, and the donor child will have the option of receiving identifying information about the donor when he/she grows up – in most countries at the age of 18. The donor has chosen to be a ID Release Donor and he has agreed to be contacted by his donor children. Even though the donor has agreed to be accessible for contact, Cryos cannot be held responsible if the donor changes his mind or if he is not accessible in the future.

When the child reaches the age of 18, or what age is applicable in the country, he/she will have the possibility of receiving identifying information about the donor from Cryos and can subsequently decide to make contact.

To receive the information about the donor, the child must be able to document that he/she is the result of a treatment with donor sperm from a specific ID Release Cryos Donor.

Why choose a ID Release Donor?

The reason for choosing a ID Release Sperm donor varies from person to person. One of the reasons may be to give your child the opportunity to decide for himself/herself whether or not to reach out to the donor in the future.

By choosing a ID Release Donor, the child gets the opportunity to know more about the donor than what has been enclosed in the donor profile.

For some donor children, it is important to know as much as possible about their genetic heritage. In those cases, choosing a ID Release Donor will be a big help for the child. Other donor children may never even wish to contact the donor even though they may appreciate having the possibility to do so.

When a donor begins to donate sperm at Cryos, he chooses whether he wants to be an Non-ID Release or a ID Release Donor. Once he has made his decision, it cannot be changed.

The donor receives thorough information to help him with his decision. He also has the possibility of discussing his choice with our experienced Donor Coordinators, who will help him fully understand the implications of the choice he makes.

It is very important to Cryos that each donor understands and feels comfortable with his decision – as it will have implications for both himself and the donor children.