The midwife explains: How does the female reproductive system work?

What is the female reproductive system?

The female anatomy consists of both the internal and external genitalia, including uterus, ovaries, fallopian tubes, vagina, labia, and clitoris.

The ovary has two purposes: to produce hormones (oestrogen and progesterone) and to mature the follicles until ovulation. 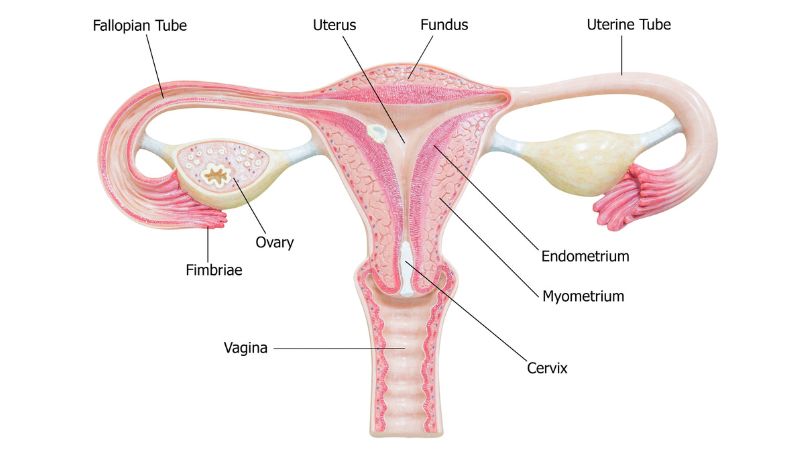 Uterus: The uterus is in the middle of the pelvis right behind the urinary bladder and in front of the rectum. It consists of a thick layer of muscle and a mucous membrane (endometrium) on the inside. The uterus' job is to protect and nourish the fertilized egg, as well as being an important part in ensuring that the child is born.

A uterus is very flexible and during pregnancy it grows a lot. In the beginning of the pregnancy, it is the shape of a tangerine and by the end the uterus has grown to the size of a large watermelon, pushing intestines and abdominal muscles to the side during the process. It is the uterine muscles that stretches and becomes longer and thinner as the pregnancy progresses.

Cervix: The lower part of the uterus is called the cervix. The cervix descends slightly into the vagina and acts as the entrance to the uterus, from where the sperm can enter, travel through, and fertilize the egg in the fallopian tubes. During pregnancy, the cervix will form a mucus plug that protects the foetus against bacteria and infections. It is also the cervix that will dilate when labour begins.

Vagina: The vagina is a hollow tube surrounded by mucous membrane and muscles. It is 7-10 centimetres deep, but like the uterus it is very flexible, and can both expand and contract, which makes it possible for it to adapt during childbirth. The vagina is a very important part of the female reproductive system as it functions as a birth canal, a transport route for menstruation, and an entrance for reproduction.

A few centimetres inside the vagina you will find the hymen. Some people mistakenly believe that the hymen is a membrane that covers the entrance to the vagina. The hymen is actually shaped as ring that consists of mucosal tissue but can appear in many different shapes.

Labia: The labia can be divided into both the outer (labia majora) and the inner labia (labia minora). The labia majora go from the pubic bone down under the vagina and are the ones that are visible. The labia minora are hidden by labia majora and consist of mucous membrane. Their purpose is to protect the urethra and vaginal opening against bacteria and infections. The labia minora differs in appearance, size, and colour from one woman to another. 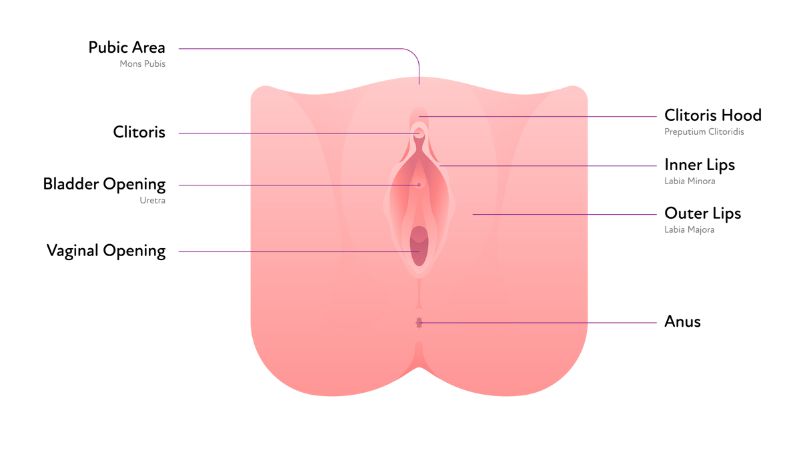 The menstrual cycle and the female anatomy

One of the main things that separates female and male fertility is the menstrual cycle women have each month, which makes it possible for them to become pregnant. Unlike the male reproductive system, women have a time limit on their fertility, which means that women are not able to have children their whole life. When women experience menopause, their menstrual cycle and ability to conceive stops. One thing men and women do have in common regarding their fertility, is the fact that both sperm cells and eggs fight each other to determine who is the best and who will be used for fertilization.

How does the menstrual cycle work?

The menstrual cycle begins the day after your period starts and lasts, on average, 28 days. One of the main things to explain in relation to the menstrual cycle is the effect of hormones. Hormones are small substances that are emitted from one organ and carried through the body via the bloodstream and from there influence other cells or organs (e.g. the ovaries). Hormones act as small messenger molecules in the body by transmitting signals to the cells or organs.

Each organ or cell release different hormones and in relation to the menstrual cycle, the hormones job is to mature the egg cells (follicles) and release the best one from the ovary, as well as preparing the endometrium (the inner layer of the uterus) to receive the fertilized egg. Hormones can affect more than just your internal organs. They can affect your mood, hunger, energy level, and ability to concentrate. As hormones rise and fall during your cycle, it is normal to experience symptoms that may come and go.

If you want to learn more about the early signs of pregnancy, then follow the link to our blog post on the subject. 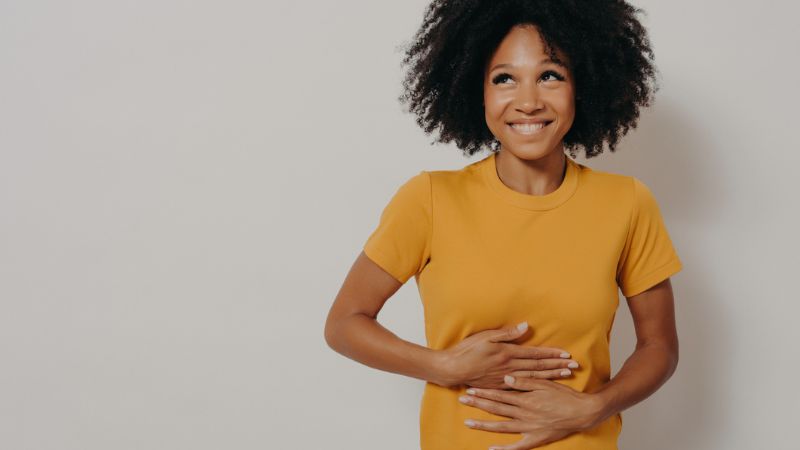 Day 1-5 in your menstrual cycle: The beginning of your period

Over the last few weeks, the endometrium in your uterus has thickened and is now ready to receive a fertilized egg. If no egg has been fertilized the thick endometrium it not needed, which will cause the endometrium to be expelled and become your period. If you are not pregnant, there will be a large drop in oestrogen, which in the end leads to new follicles maturing and thereby preparing for a new cycle.

The follicles contain egg cells which, when they mature, produces estrogen and therefore, estrogen will slowly start to rise again during your cycle. Your period can cause cramping pains in the lower abdomen and lower back, and the large drop in estrogen can affect your mood, energy, and hunger.

Day 5-13 in your menstrual cycle: The egg cells mature, and your mood becomes better

The small follicles cause the oestrogen level to rise and contribute to the endometrium starting to grow again to get ready to receive a fertilized egg. At the same time, one of the many follicles will mature and prepare for ovulation. This will have a positive effect on your mood and energy as the hormones slowly rise.

The menstrual cycle is an example of how impressing the female reproductive system is. An effect of the rising hormones is an increase in sex drive, which signals to your body that now is the time to become pregnant.

Day 14 in your menstrual cycle: Time for ovulation

During the 14th day, the leading follicle produces a lot of oestrogen, which the brain gets notified about and sends out a new hormone (lh surge) which causes the follicle to burst - this is called ovulation. The next 24 hours is defined as the "fertile window", which is the only time during the month, where you can become pregnant.

Some women feel their ovulation in one side of the lower abdomen and others may not feel anything. If you are trying to become pregnant, you can use an ovulation test to learn which day you are ovulating and thereby timing when to have intercourse. An ovulation test works by measuring the level of a specific hormone in your blood.

Day 15-20 in your menstrual cycle: Progesterone is released

When the follicle bursts, the remaining follicles will transform into the corpus luteum, which produces the hormone progesterone. The purpose of progesterone is to keep a fertilized egg in the uterus until the placenta is strong enough to take over and maintain the pregnancy. The corpus luteum sends a signal to the brain that no more follicles should be made at the moment.

If the egg is fertilized and on its way through the fallopian tube, the cells will already start to divide before the egg reaches the uterus and attaches itself into the endometrium.

Day 21-28 in your menstrual cycle: The pregnancy hormone is released

If the egg has been fertilized when it reaches the uterus, it will now have turned into a mass of cells which will stick to endometrium. The fertilized egg will grow and create the hormone HCG, which sends a signal to the corpus luteum to maintain the production of progesterone and oestrogen which will prevent the endometrium to be expelled and you from getting your period. HCG is also known as the pregnancy hormone, since it is the hormone that is measured when using a pregnancy test.

These days you may experience strong mood swings due to the drastic drop in progesterone and oestrogen.

Hopefully you now know a bit more about the female reproductive system and feels ready to start your journey towards parenthood. If you need help from a sperm donor to continue your journey, then follow the link to read more about donor sperm for fertility treatment and how to buy the sperm. If you want to read more blog posts from our midwife Julie, we can recommend you read the blog post 10 tips on how to increase your chances of getting pregnant.